It is true that security guards are in more demand now than before as more companies and individuals have become aware of the potential risks of leaving a place unguarded and as crime has risen in many areas. People who are in this profession protect and deter activities that can pose threat to property and people. In this article we take a closer look at security guard salary, various factors that affect the compensation and how one can work towards increasing their pay.

How much do security guards make?

The salary of security guards vary by state and also by cities within the state, depending on various factors such as cost of living, competing opportunities, minimum wages and how many professionals are being hired by private safety service providers.

As of December 2012, the average salary in US for people employed in this profession is about $39K for someone with experience and other qualification. If you are just starting in the field, you may get a much lower compensation. Also the range can be as wide as $20k – $45K.

A recent opening at the National Gallery of Art in Washington DC was offering up to $44K to eligible candidates.

The security guard salary will depend on the other skills you possess. In addition to the ability to provide protection to the premises one is watching, oral and written communication skills, knowledge of basic emergency procedures, applicable law are also important. These skills will help you conduct your responsibilities in a better way.

Understanding the details of the compensation awarded to employees in this filed will help you make right career choices and help you work towards increasing  your pay.

Armed guards get paid more than unarmed: If you are an unarmed officer and want to get your billing rates higher, you should consider going for firearms training as after meeting some additional requirements you will be eligible for higher pay. You can check with your employer before going for this course and see if the expenses for meeting the requirements will be covered by them.

Change the State you live in: Salary data shows that you can earn a higher compensation for the same role in some States as compared to others. Consider relocating, if you want to draw a higher paycheck. Start applying for jobs in other states where you can have a higher income and still maintain the same cost of living.

Change the industry you work in: As the State one resides in and works in has an impact on the salary; the industry a person works in also has an impact on the salary. Security professional who work in prisons and correctional facilities draw more money than guards who work in hospitals and schools. Consider changing the industry you work in, your role as a security provider will not change as much, but you have a good chance of getting a better pay.

More experience: As you gain more experience and grow in the way perform your work, you can expect your salary to grow. Also your responsibilities can grow with experience and you can get promoted as a supervisor with a significant pay raise. Experienced security professionals get paid better than ones with little to no experience.

There is expected to be a further increase in demand for this profession in the next 5 – 10 years as more and more responsibilities performed by local police authorities will be transitioned to security officers and guards with firearms. Keep a long term horizon and you have opportunities to draw a good salary in this field.

Security guards protect people and property by deterring illegal activities in the area they patrol. It can be a rewarding career choice for people with no college degree but who are willing to undergo training to get their license. How much do security guards make? The salary of a security guard depends on various factors such as specialization, state and city one is working in, experience, their employer and the site they are working at. In this article we give you complete analysis of security guard salary. 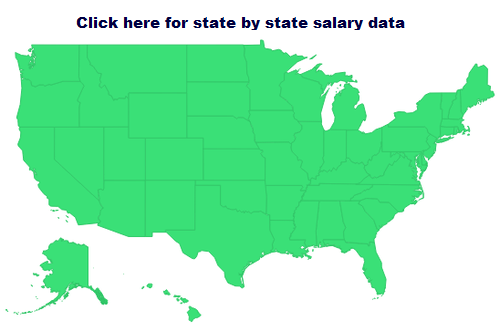 What is the Average Salary of Security Officers?

The range of salary is very wide and can vary from $17K to $42k from the bottom 10% to the top 10%. The wide range is a function of the difference in compensation by state and various other factors mentioned earlier. The table below depicts this range.

Additional compensation may be a result of overtime as in most cases they are not eligible bonus.

Best and the Worst States to Work In

Top Industries to Work In

Investigation and Security Services is the top industry for security guards as they are hired by security firms who then are contacted by clients seeking security services.

How to Become a Guard?

The rules to become a security officer varies from one state to another. They also vary from the specializations for armed and unarmed guards. Most states require one to obtain a license by completing the required training, passing a background check, being free of convictions, being physically fit to perform the job, proper work authorization, etc. The training can range from a couple of hours to a couple of weeks. Training is an essential part of understanding the responsibilities and building the right skills for this profession. Some of the common modules covered across all states include observation and reporting, public relations, rules and regulations, handling difficult people, coordinating with law enforcement, proper use of firearms and more.

What is the Job Outlook?

This field experiences a lot of churn as many guards leave the industry in many new guards take their place. For people looking for employment in this space, that are generally opportunities to be found. Most of these opportunities are at an entry-level. You can expect more competition for specialized jobs which require one to perform video surveillance, carry firearms, and other specializations that require more training and experience. It will be easier for people who have a background in law enforcement to break into this field.